Well, I’m back from vacation. Thanks for being patient and sorry I had to post rushed art. It’s not as much fun when you’re not intentionally doing it!

This work was almost completely different. I originally was going to draw Domino the way she appears in the comics, albino with one dark eye.

Think Spot from the Dick and Jane books.

ANYWAY, while telling an associate of mine about my grand plan, she laughed.

“You’re such a contrarian”.

I almost argued with her. Which would have proved her point. 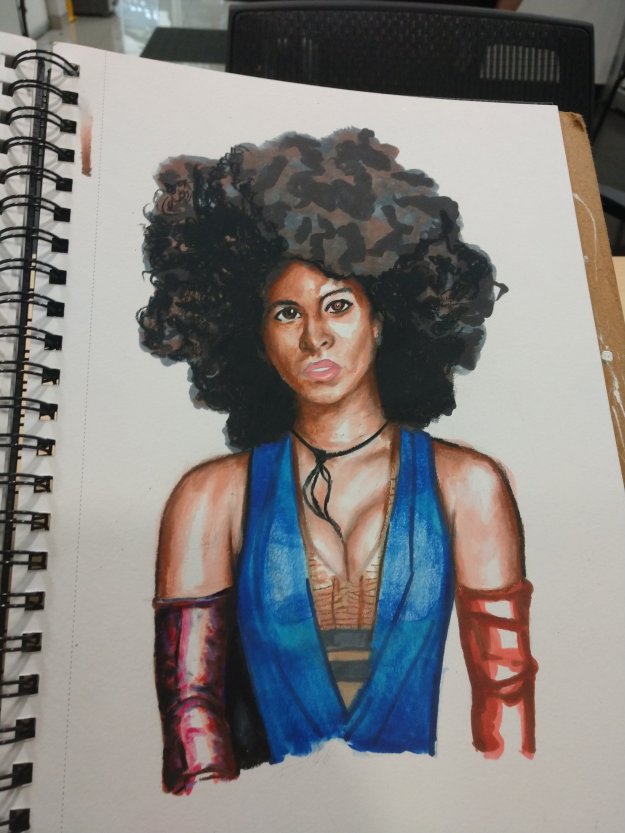 Instead I decided to, for a change, do what was expected. It was hard, you guys!

I may have a problem. A psychological blindspot.

Aside from the original sketch, most of this was done without reference. I figured it was okay if it wasn’t quite Zazzie; after all, she’d stood us up at All Star Con. I owed her nothing, ha-ha. 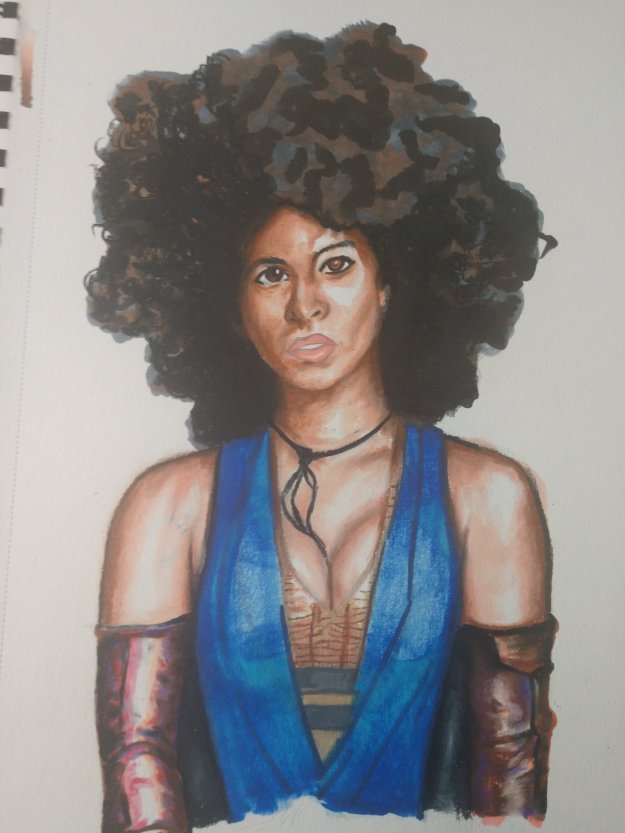 Next came the color markers. I was going to do flats of colour, but forgot and started getting overly elaborate. Oops! 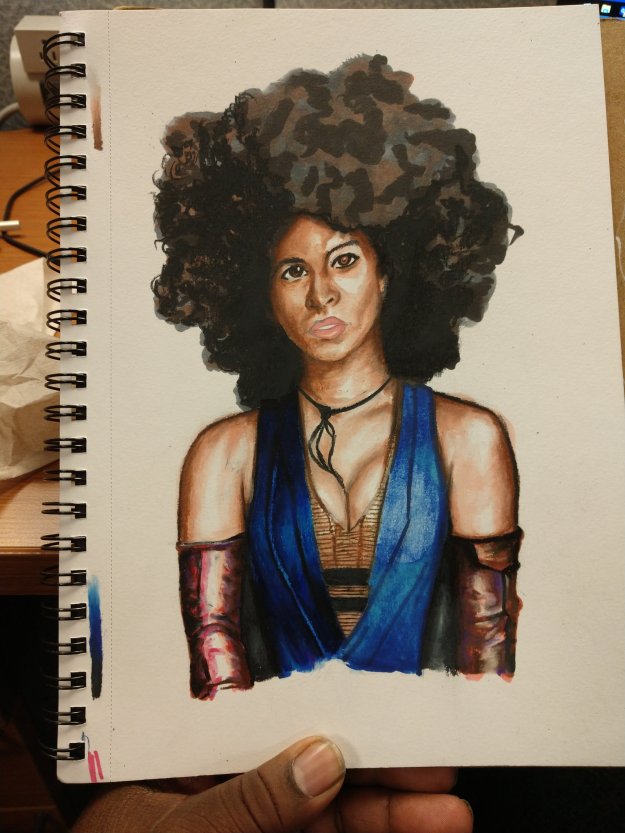 Next came the colored pencils. I have to admit, it’s been many months ago since I last used them I did a few blend outs to make sure that I was using the right pallet. I’m sure my instinct for it will come back eventually. 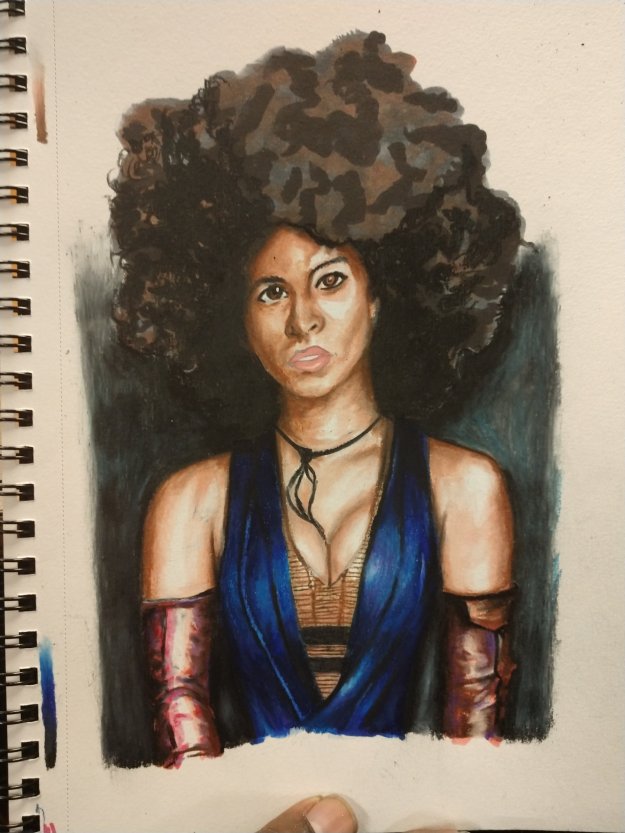 In the meantime, I had to fight an old enemy; smudging. While your strokes are fresh the oil from your hands can continue to smear them, usually leaving your image looking blurry. A piece of paper or cloth under hand fixes the issue. Also, Pro tip: learn how to shade by gradually lifting pressure on your stroke. Unless you’re using charcoal, the ability to shade without smudging is going to improve everything about your image.

Finally, I was almost done! I was going to let the lips have a more natural tone until I was asked why I left her mouth looking flat.

Fresh eyes on the image. Plus, I’m trying to fight my opposite urge. So I “fixed” it. 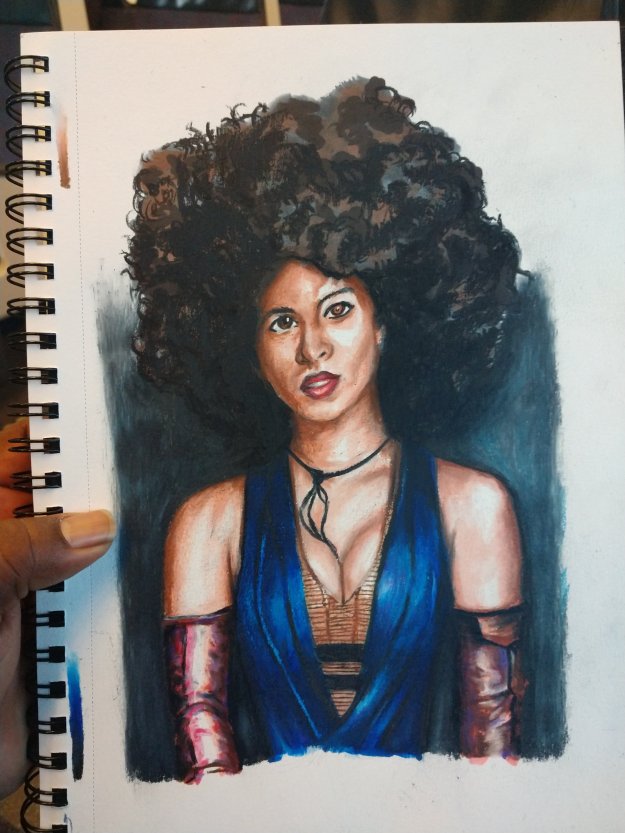 And that’s that. I’ll probably do more colored pencil work. It was fun.