Well, as much fun as I’ve had in the last few days doing traditional stuff,  you just knew I was going to get back to drawing the new fashioned way. My newest muse is a cosplayer named Callie and hopefully some of you recognize her from her page. Her linework was done with a hard edged brush set at 7. The detail lines were done on a separate layer at 4. I didn’t clean up my lines yet; once I get into a zone, certain lines are done over and over until I feel that they look fairly accurate.

Once the lines are done, I grouped all of those layers together and lock them. Believe me, you don’t want to spend ANY time fixing a dumb ass mistake now!

Next I began to add colors. Under a different group, I create a layer for hair. I’ve decided that (a)I’m going to start with muted versions of the final colors for mood and (b)I’ll use colors already in my swatches. If you look really closely, you can pick them all out in the screen grabs.

With the skin, I decided that a little bleed over is good. It will help later to create the effect of her wearing objects, as opposed to them merely sitting on her. What about her eyes and lips, you say?
Stay tuned… 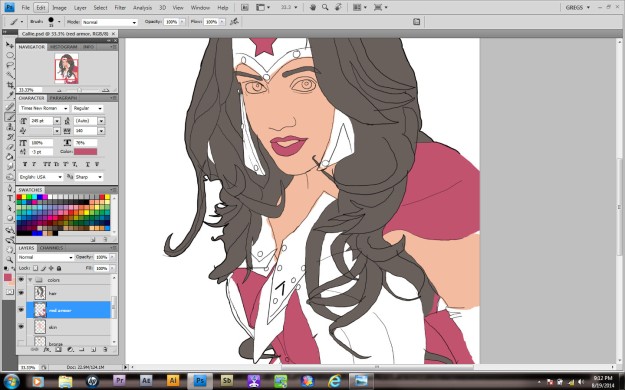 This will be the bottom layer of this group; the next two are above it. Again I pick the flattest color for my fill, allowing me to add a clipping mask to any layer in order to work it. 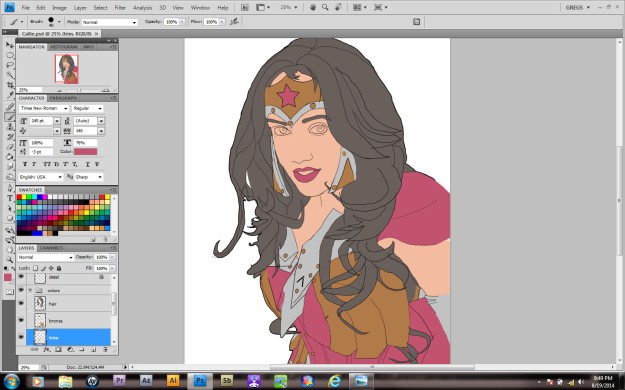 So clearly there is NO silver on Miss Amazonia in the real image. There won’t be here as well. I’m using the color and mixing it later to create a sheen on the bronze. You’ll like it, trust me.

I’m feeling a little under the weather, so I don’t think I’ll get a lot done today; but believe me, when it’s done I expect to be pleased! Have a fun day!