It reads like a rant, right? It’s not. I’ll always pick freedom. But I also know better than to think things go away because I wish it.

I rarely draw kids. It’s not that I don’t like them; it’s that I don’t want to be trapped in the business of kids and pets. I have no interest in them.

But I do get it. My son was a little cutie, like this one. Curly hair and all. It took a long time to perfect those ringlets.

Drawing loved ones isn’t the same. It’s an interesting challenge, because you don’t really see the person only. You see them through the lens of your affection for them.

That makes it difficult to accurately judge what you are seeing. Even the most ordinary act can seem to be wonderful in such light, to say nothing of the person. To me my mom looks young and has a special glow.

You aren’t able to see that for the loved ones of others. Sometimes your interpretation of a person or pet can actually upset a customer.

People often don’t understand that an artist has developed a style that they may not appreciate. We’re not Xerox copiers and I’ve had a few experiences where expectations didn’t sync up with the reality.

That’s why it’s important to communicate with your client; if they are interested in a commission of any type, find out WHY they think that you’d make a great choice. Are they fans of your work? Did they pick you out of a hat? What are the expectations of the final work? How do they feel about the subject? Can they tell you a story about them?

Well, it’s that time of year when people approach me to draw really buff women. I don’t mind ❤️

Believe it or not, the whole thing is something that flowed from a lifelong love of weightlifting for me. I have absolutely no problem with a woman trying to be as strong as she wants. 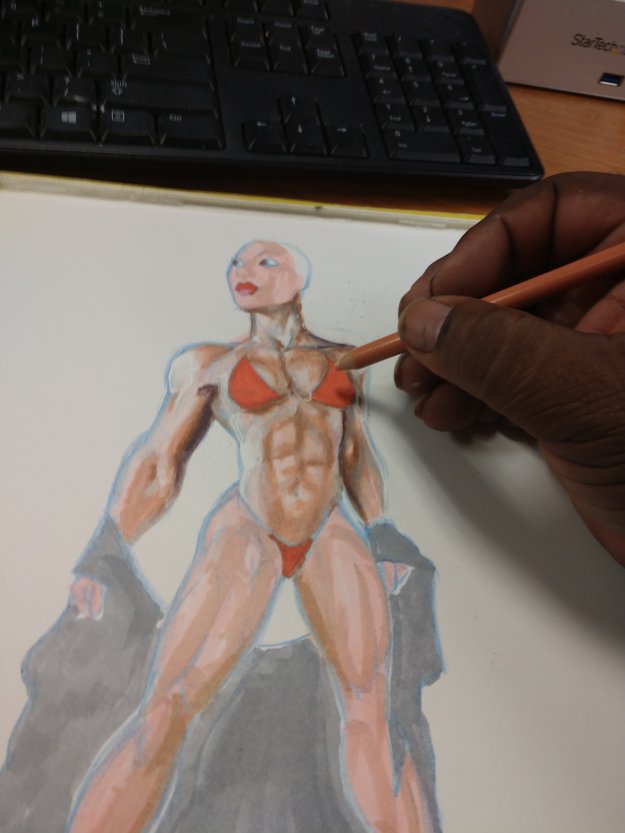 Of course my first show as a spectator made me want to draw these superhuman physiques. And the ladies were more amiable and less guarded than the guys when asked. So I naturally started there. 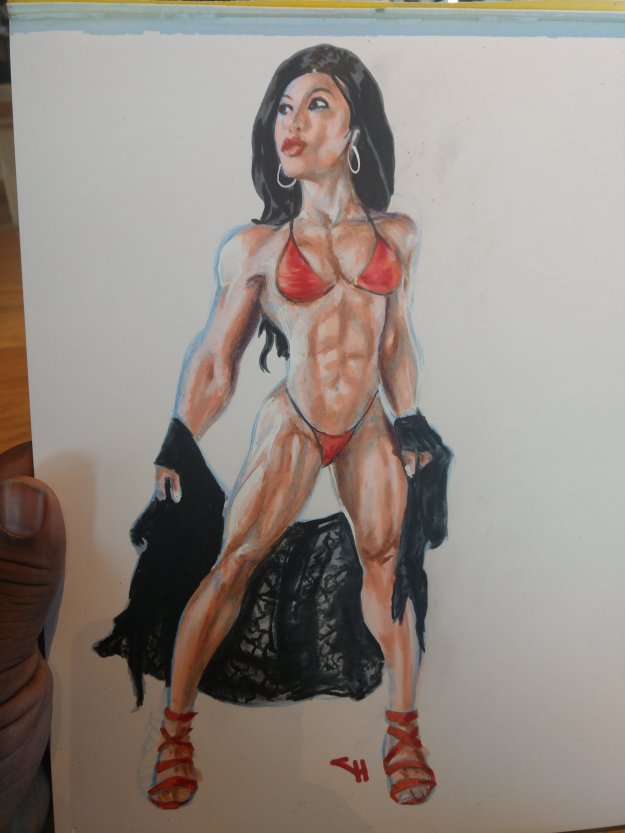 Having someone willing to pose for dramatic effect was a turning point for me. I’d never had an opportunity to do still life drawing; so I relished having access to people so willing. I guess you can say that I gained a new artistic appreciation for bodybuilders.

I try not to over sexualize the people I draw. That component is there of course, but it’s not the point.

If you’re trying to get the same effect in your work, you have to understand that the people you’re drawing ARE PEOPLE. I do the same thing with cosplay. I find it brings out the best in them.

Sometimes it’s good to just draw an emotion. It keeps things simple, but gives a clean look. I actually like those best.

So that’s that! Now you have an answer for my drawings of women being mostly muscular.

Oddly enough, no one wants an off-season image of themselves, lol. 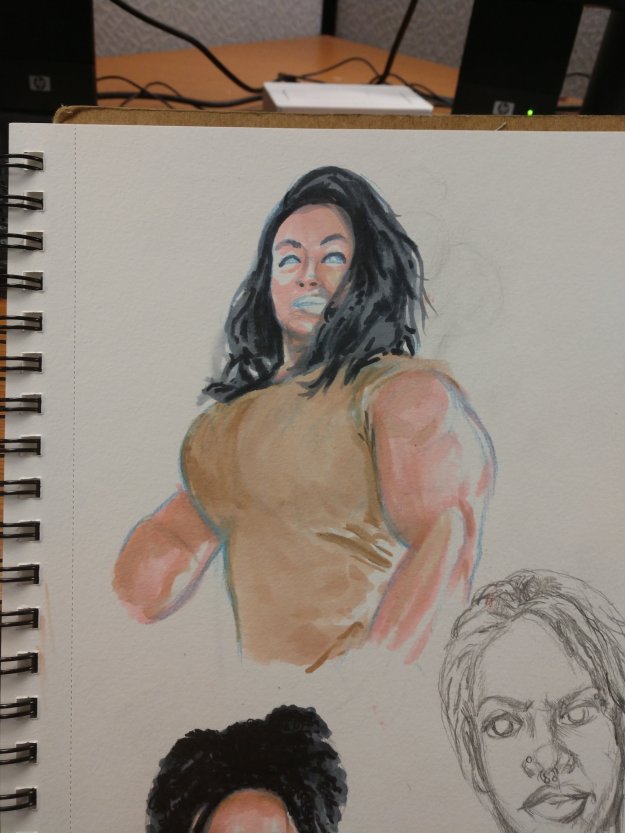 There are a few exceptions. And honestly, if you’re one, let me know, because I’d love to do more pictures like this one. 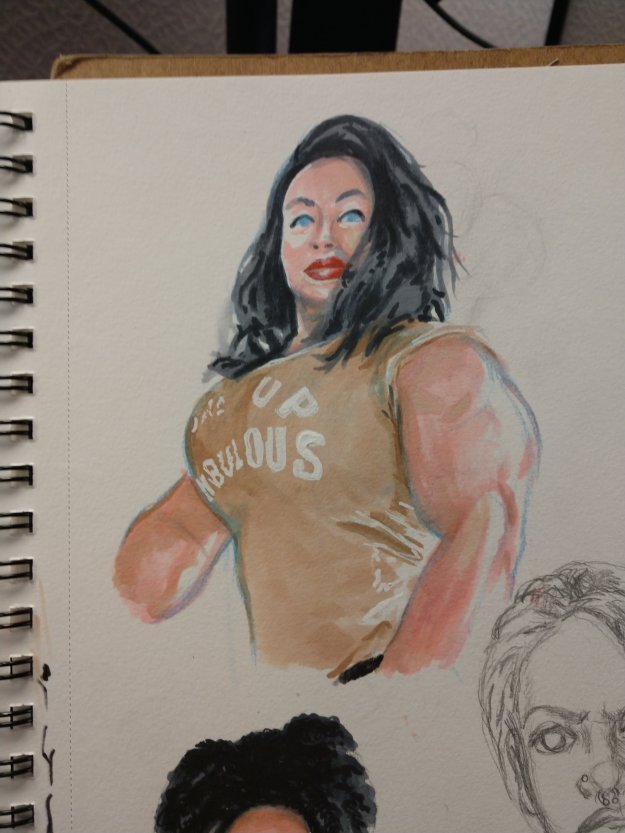 Okay… I’m going to try something for the first time.

I drew this picture of my son’s mother, my ex-wife. We talked for mother’s day and afterwards I felt physically ill. She was the love of my life and I still miss her everyday. So I was hit with this certainty that I didn’t exist anymore. I wanted to scream and I wanted to ugly cry.

I started drawing instead. 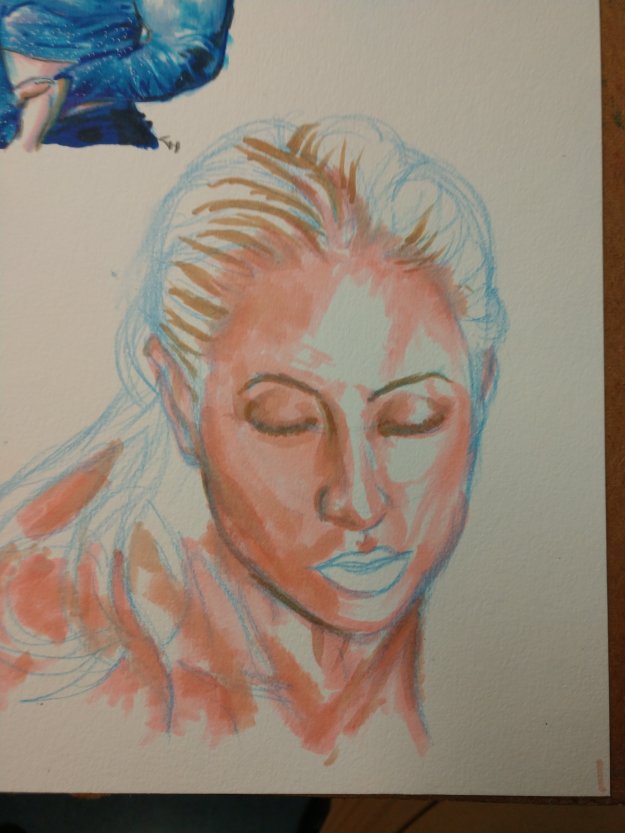 I did it as fast as I could. I just drew her like she was in the shower, except the water is mine. My tears. And NO ONE would know that. Unless I told them.

So as I went along, creating this little slice of my psyche, I began to feel better. So now you know.